We’ll be joining the Olympics fun on Thursday with our very own sports extravaganza, as we raise money to help preserve a vital piece of forest in Brazil. 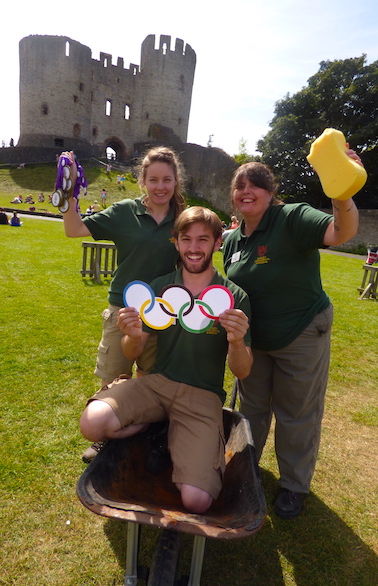 DZG staff from across the site will be going head-to-head in our very own Zoolympics in a variety of zookeeper inspired games in the castle courtyard  with the losing section being put in the stocks and thrown at with wet sponges!

Conservation Officer, Chris Leeson, said: “Come and watch as our keepers, customer services and office staff compete in wheelbarrow races, straw bale stacking, tug of war and guess the animal poo games and help us punish the losers by purchasing sponges and buckets of water and giving them a good soaking!”

There’ll also be the chance to join in the fun with children’s animal-themed competitions running throughout the day, including GIBBON DANCING (hula hooping), FLAMINGO FALLS (balancing on one leg), MONKEY MADNESS (knock down the cuddly toy) and PENGUIN WADDLE (egg and spoon race), when we’ll be raising money for World Land Trust’s Atlantic Forest appeal.

The charity is working to raise £40,000 to buy a part of the remaining seven per cent of Atlantic Forest in Brazil, which is one of the world’s most important regions and home to many endangered plants and animals including puma, sloth and woolly spider monkey.

This land will form the Olympic Forest Reserve and will be a protected habitat for the different species to survive and increase their numbers.

Chris added: “Conservation work is key to our DZG’s ethos and we’re proud to be involved in this campaign.

“We hope visitors will come and support us and help us raise funds for such an important appeal, as well as joining in the fun and games and cheering on our staff.”

Previous: An icy tapir treat
Next: Special delivery for Ellis