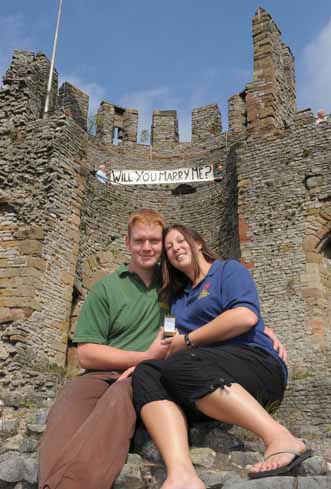 Adam, who works with big cats and ungulates, made a huge banner bearing the words Will You Marry Me? and asked Assistant Curator Richard Brown and fellow keeper Sarah Evans to help him wrap it around the walls of the 11th century Dudley Castle within the zoo grounds.

Adam then took Caroline, a former DZG Education Presenter, into the castle courtyard to show her his handiwork  and was delighted when she said yes!

Adam said:?”I’d been planning it for quite a while, but because Caroline was back at the zoo doing Outreach work in the summer holidays I had to sneak off to make the banner and arrange everything with Richard and Sarah, but she really didn’t suspect a thing when I?told her to look up at the castle walls.”

Caroline, a science teacher at St Thomas More School, in Willenhall, said:?”I was just so surprised. Adam got me along to the castle on the pretence of photographing meerkats in a nearby enclosure, but I truly didn’t expect anything like that, it was amazing.

“I thought he’d spent the whole of his day off in bed, instead of which he’d been making the banner and plotting the proposal!”

Adam and Caroline plan to marry next August.

CAPTION:?Adam proposing to Caroline with Will You Marry Me banner wrapped around castle walls.