An animal mad seven year-old schoolgirl who hopes to become a keeper at DZG when she grows up, has spent 60 hours making a scrapbook on the historic attraction. 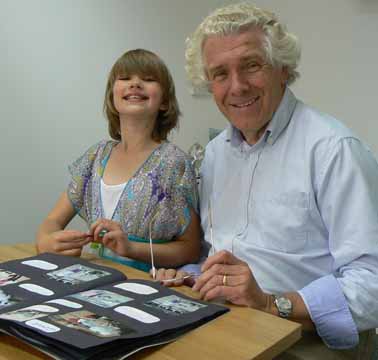 Elizabeth Ashby, of Stourbridge, compiled the scrapbook and interviewed DZG CEO, Peter Suddock, as part of a Brownie badge, Friend to the Animals.

Elizabeth, a new member of Wollaston Brownies (part of 7th Stourbridge Group) had to complete a number of tasks to earn her first badge.

As well as creating the scrapbook, she made a poster about her pet cat, Milo, carried out research into extinct animals, and put together a book about farm animals for pre-school children.

Proud mum, Helen, said Elizabeth, a pupil at Gig Mill Primary School in Norton, had worked hard choosing the photos and deciding what to write about the animals, with most of the information coming from DZG’s website.    She said:?”Elizabeth decided what she wanted on each page and then we did 60 hours of cutting and sticking to create the 98-page scrapbook.   “Elizabeth loves animals and really wants to work at the zoo. Her 23-year-old brother, David, has Downs Syndrome and autism and he also loves animals, and many of the pictures Elizabeth chose for the scrapbook feature him. We spend many days every year at Dudley Zoo.”   DZG CEO Peter Suddock said: “Elizabeth has obviously worked very hard on the project and the scrapbook is full of interesting facts about DZG’s animals and the site.   “She is often on site with her family and always asks staff about the newest arrivals.”   Elizabeth will hold her eighth birthday party at DZG later this month and will also enjoy a Little Zoo Keeper experience.