Dozens of bins, tools and stationery items have been donated to DZG by Lichfield-based business, Newell Rubbermaid. 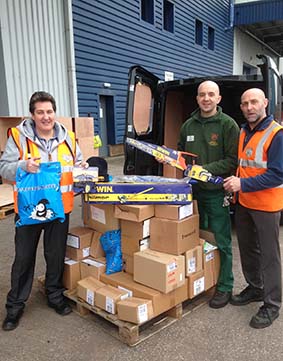 Richard said: This is the fourth time the company has donated surplus stock to the zoo and we are so grateful as we wont need to buy any more tools for quite a while.

This donation was particularly generous – I had to make two journeys in the zoo van to collect it all – and very helpful as the items can be used across the whole site.

The stationery can be used for young visitors on the Farm and in the Discovery Centre and we can always make use of tools for building and maintaining enclosures.

He said Irwin tools handed over included saws, chisels, pliers and a vice  which was put straight to good use as Maintenance Worker Malcolm Clements broke his that day!

Richard said the Fradley Park branch of Newell Rubbermaid had been loyal supporters of the zoo for years.

The firm first offered surplus tools after one of their staff became a DZG Keeper for the Day and realised we could put them to good use.