A log placed in the crested porcupine enclosure lulled the curious creatures out of their daytime slumber. 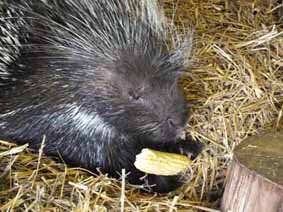 Porcupines are typically nocturnal creatures and don’t usually rouse during the day, but they were so interested in the new decoration that they made sure they were awake to investigate and got to work gnawing off the bark.

The branch was one of a number which fell to the ground across the zoo site during the recent snowfall and recycled in many of the animal enclosures.

Branches were put into the tanks in the new-look Reptile House, while also used in the wallaby, mara, giraffe, tapir and Barbary sheep enclosures.

Previous: 100 karate kids at DZG
Next: Nene goose moves in