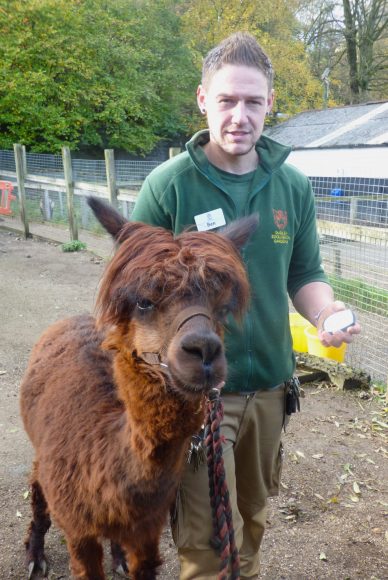 DZG farm favourite, Crunchie the alpaca, has recently been diagnosed with diabetes, and is receiving a similar insulin-based treatment as his keeper, Ben Vanes, who is also a diabetic.

“They bought a diabetes testing kit, which came up positive, so we got in the zoo vet who carried out further blood tests, which confirmed their suspicions and prescribed him insulin, which staff have to inject him with twice a day.”

Just as a human would, keepers have to check the 15 year-old’s blood regularly throughout the day by using a handheld monitor to read his glucose levels and are keeping track of his weight during weekly weigh-ins.

Matt added: “Staff harness him first, before pricking his ear to take the sample and then giving him insulin accordingly. He’s not fazed by it and lets the keepers get on with it.

“We’ve reduced any food stuff that has high sugar levels in his diet and he’s responding really well to treatment and his glucose levels are reducing with the insulin.

“We’ve discussed his treatment with other animal collections who have been in the same situation and we’re confident that by us managing his diabetes, Crunchie can continue leading a healthy life.” 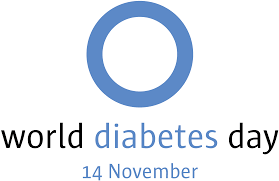 falls every year on November 14 and is a day when millions of people around the world come together to raise awareness of diabetes.

Having diabetes means your body is unable to breakdown glucose into energy, either because there’s not enough insulin to move the glucose, or the insulin produced doesn’t work properly.