A domestic goose, named Derek, caused quite a flap when he underwent surgery for a broken wing. 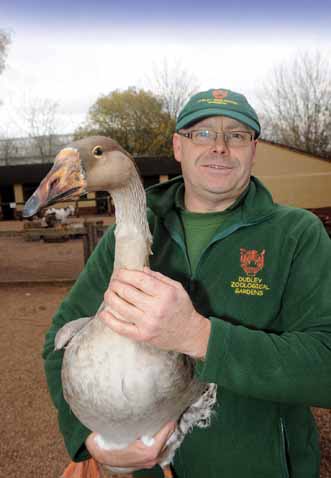 Derek was one of two goslings, hatched in 2010, named after curators Derek Grove and Matt Lewis by mischievous keepers.

Curator, Matt Lewis, said:?”It was a really nasty break and no-one knew how it had happened, although we believe Derek must have caught his wing on something on site.

“The Zoo vet used metal rods to set the wing but it took six months to heal and when the pins were removed you could immediately see the muscles were very wasted.

“Derek had no muscular definition in the wing, but we kept him inside on his own and thankfully, within ten days he was flapping about and fully back to normal.”