Himalayan prayer flags displaying the wildlife wishes of a group of Sedgley school children are being flown in the Discovery Centre. 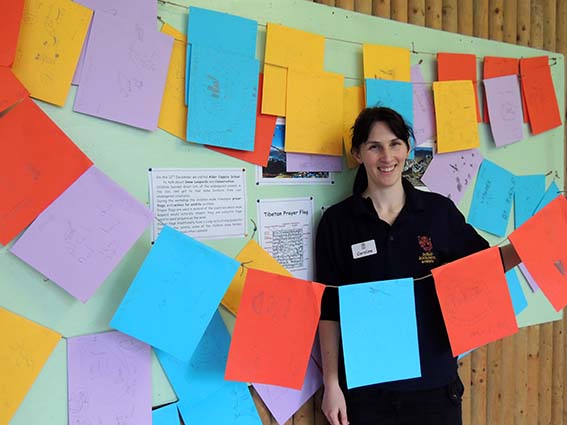 Youngsters from Year 2 at Alder Coppice Primary School have decorated the colourful paper flags, which depict their wishes to help save endangered animals.

The flags were designed and made during an outreach workshop led by DZG presenter Caroline Howard, when she spoke to the children about DZG’s snow leopards and raised awareness of some of the most endangered animals at the zoo.

Caroline, pictured above with the children’s flags, said: “Prayer flags are used in many of the countries where snow leopards live. People write prayers, wishes and mantras on them and decorate them with images of powerful animals.

“They believe that if these flags are blown in the wind, the message will spread.

“All the children really enjoyed making and decorating the prayer flags, which display messages such as stop hurting snow leopards, stop killing tigers and stop taking animals’ fur and we’ve hung them in the Discovery Centre for visitors to read for themselves.”

As well as making their own wildlife statements, the youngsters were also able to touch a number of animal skins and biofacts from real endangered creatures.