We’ve pledged to give away another £12,000 to three worthwhile in-situ animal conservation projects this year and who gets the most money is down to you! 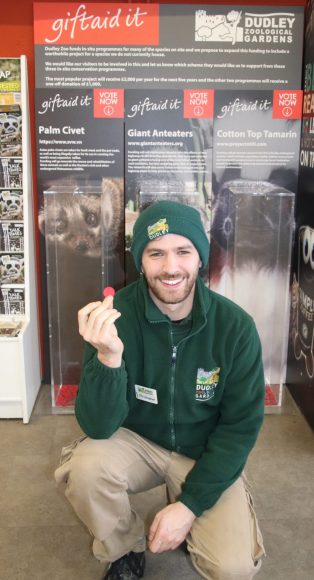 Visitors who add the voluntary 10 per cent Gift Aid donation to their entrance fee throughout 2020 will be given a token to vote between cotton top tamarins, Asian palm civets or giant anteaters.

Funding will go into researching the population health of this critically endangered species, assessing their habitats as well as developing community programmes which will encourage the local people of Columbia to help protect these small primates.

Funding will go towards the rescue and rehabilitation of Asian palm civets, who are taken for bush meat and the pet trade, as well as for their use in creating the world’s most expensive coffee. The organisation also works with the Owston’s civet and other endangered Vietnamese wildlife including pangolins, binturong and leopard cats.

Funds will help research into the effects of new highways in the Brazilian grasslands on the giant anteater, who are becoming Brazil’s most killed animals in road accidents. Highways are fragmenting populations and stopping gene flow.

DZC Conservation Officer Chris Leeson, pictured right said: “We’ve picked these three species, two of which we have here at the zoo, as they are all species which are mainly impacted by humans and therefore it’s our responsibility to support their conservation.”

Previous: A milestone encounter!
Next: Decorate our vivs!