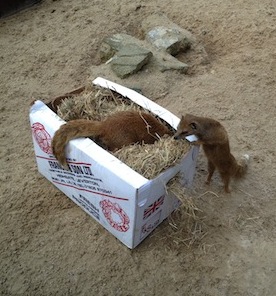 Staff filled the large box with shredded paper and hay mixed in with mealworms and fruit treats, before placing it in their enclosure.

And the mongoose, being the inquisitive creatures that they are, soon delved in to investigate!

Trainee keeper, Jo Turner, said: “The stuffed box enabled the mongoose to use their natural foraging behaviour to hunt out the food as they really had to dig deep to get their treats.”

New mates for the mongoose! 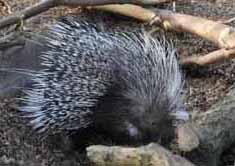 Two new roommates have moved in with the yellow mongoose.

The crested porcupines have relocated from the indoor Monkey Tails exhibit and are settling into their new outdoor surroundings in the mongoose enclosure.

“The two species will happily live alongside each other as the porcupines are a nocturnal species so will become more active and venture out in evening, when the mongoose are tucked up inside for the night.”

Previous: DZG on BBC’s Inside Out tonight!
Next: Meerkat’s favourite haunt . . .