Four Gelada baboons have moved into a revamped iconic Tecton enclosure at DZG. 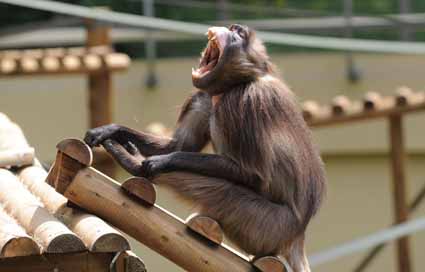 A first’ for DZG, the endangered species have transferred from collections in Switzerland and Germany. They are the last surviving species of a once-widespread group of grass-grazing primates.

Three brothers, Fisseh, Femi and Ebano transferred from Zurich, with the fourth arriving from Berlin. Last week staff asked members of the public to name him and our Twitter campaign came up with  . . .  Bob!

DZG Senior Curator Derek Grove said: “The four have settled in tremendously well and are really enjoying the new enclosure, but it was sad that the fourth baboon hasn’t got a name so we tweeted members of the public for ideas and they suggested Bob – so that’s now his name.”

It was all hands to the deck as 20 members of staff at the leading tourist attraction transformed two sections of the iconic Tecton triple complex at a cost of £10,000, for the four endangered primates and an aged black bear. 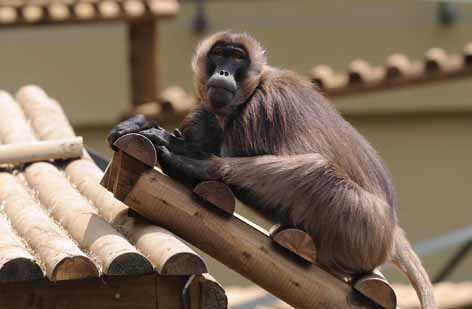 The building is one of 12 concrete Modernist structures on site which make up the world’s largest single collection of Tectons. Designed by Russian architect Berthold Lubetkin and constructed between 1935 and the zoo’s opening in May 1937, they are listed as Buildings of Special Architectural or Historical Interest and were given World Monuments Fund status in 2009 as being of international significance. Earlier this month the first phase of £1.15million Heritage Lottery Funding was secured for the restoration of the Front Entrance, Kiosk One, Safari Shop and Bear Ravine.   Derek said: “This is one of the most well-known Tecton buildings on site and is now fully in use. The complex originally provided a trio of enclosures for lions (right), polar bears (centre) and tigers (left), but the central area has remained empty for several years after polar bears left the animal collection in the late 1980s.”   The baboons have now taken over the former bear enclosure while 31-year-old Asiatic black bear, Inca, has moved to the central area. The third section is home to an Amur tiger.    He added: “The new layout, which was designed in-house and constructed by members of the keeping staff, includes a series of climbing frames and heating in dens. By doing this work ourselves we have kept costs to a minimum and created bespoke enclosures for two very different species.”   He added: “Inca is an old lady and has a more comfortable enclosure, while the baboons’ area has created a more suitable space for the group of primates.”   The gelada (Theropithecus gelada) is a species of Old World monkey found only in the Ethiopian highlands. They are endangered due to a reduction of their range as a result of agricultural expansion, and shooting as crop pests. 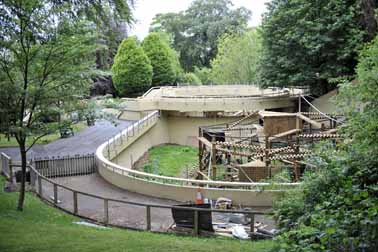 CAPTIONS: Meet Bob, one of four Gelada baboons who have moved into one of the site’s iconic Tecton enclosures.   The enclosure is part of the iconic Tecton triple complex which has been revamped by DZG staff.