We’ve launched an in-house employee of the month scheme to reward staff who have gone above and beyond. 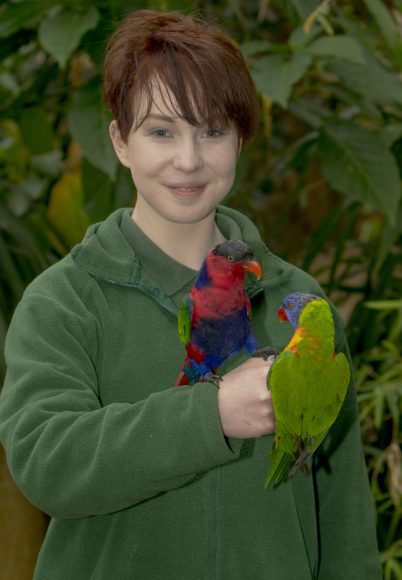 And our first ever winner is Apprentice Keeper Mary Taylor who works on our bird section.

Nominations come from colleagues and the scheme is open to all staff working across all the site’s departments, with Mary chosen because of her friendly and helpful nature towards visitors and staff.

Birds Section Leader, Nicola Wright, said: “In recent weeks we’ve received quite a few messages on social media regarding how friendly and helpful Mary was, especially in Lorikeet Lookout.

“Also, she has just started to lead the Bird of Prey display talk on the microphone, something which was probably never going to be expected of her as an apprentice keeper and what was even more impressive was that she volunteered to do it.

“She’s only just turned 17 and has settled into the job very well and it’s nice to see her get the recognition for the effort she’s putting in, not just from myself and fellow keepers, but also from the visitors too.”

Mary, from Stourbridge, who joined us earlier this year as part of a year-long training scheme, was presented with gift vouchers.

Previous: First Violet Turaco
Next: A grrr-eat amount for lions