Three chinchillas have been donated to Dudley Zoo after their owner sadly developed an allergy to them. 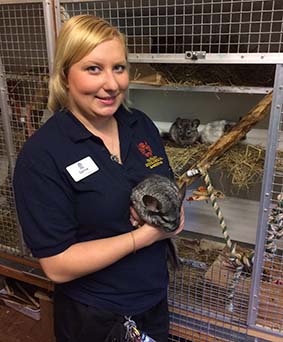 Meeko, Tink and their daughter Lady have been handed over to our presentation team in the Discovery Centre and will eventually star in school lessons and birthday parties.

Presenter Dorrie Hall, pictured left, said: “These three gorgeous creatures were donated by a lovely lady who could no longer keep them.

“They are settling in well but are still in quarantine so it will be a few weeks until we will be using them. They will take part in lessons and birthday parties like our other chinchillas do.”

Meeko is mosaic and both Tink and Lady are grey, the same colour as you would find out in the wild in the Andes Mountains in South America.

Chinchillas are classed by the IUCN as Critically Endangered in the wild and current estimates stand at around 10,000 remaining. Sadly they have been hunted for their extremely soft fur, the second thickest of any mammal, only beaten by the sea otter!

Dorrie added: “They are very popular pets but as soft and cute as they are, there are some things people should take into consideration first. For example, they are extremely social animals living in groups in the wild of between 100-200, so it is recommended to keep at least two.

“They are also a very long term commitment as they have a long potential lifespan, with some captive chinchillas having reached the grand old ages of 20 or even 30 in some cases!”

“They don’t make great pets for younger children as they are extremely agile and fast. They can reach speeds on average of 35mph and can jump easily to the top of your fridge, around 6ft in the air!”

Come and say hello to our three newcomers when you are next at DZG!