Two tiny hedgehog lookalikes are settling into a new home in the Discovery Centre. 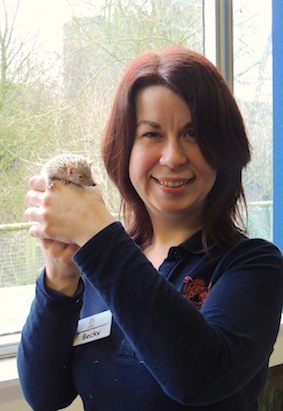 The arrival of the Madagascan tenrecs is a first for DZG, and staff are eager to introduce them to visitors during education workshops and Little Zoo Keeper sessions.

The four-year-old boys have transferred from Birmingham Nature Centre and have been named Eccles and Tellie, after their taxonomic name, Echinops telfairi.

Although similar looking to a hedgehog, tenrecs are an entirely unrelated spiny animal and are native to Madagascar.

DZG Presenter, Becky Iwahashi, pictured right, said: “Tenrecs evolved to fill a niche in Madagascar, where they live in tropical and subtropical forests and grassland.

“They are nocturnal creatures, but are very active when they are awake and don’t keep still for very long. They are also great climbers, aided by their sharp claws.”

Tenrecs are an omnivorous species, feeding on vegetables and insects.

Like hedgehogs they have poor eyesight, but their other senses are well developed, especially their whiskers, which are very sensitive.

They use their blonde spines as protection against predators, including the spikes on their small conical tail. 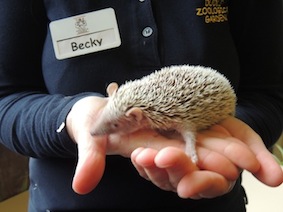 When preyed upon they will roll in a ball and raise and rattle their spines. If that fails, they will charge towards their predator in attack.

Becky added: “We’re looking forward to introducing Eccles and Tellie to our Little Zoo Keepers and our school workshops and helping educate people that they are not hedgehogs, but great examples of conservation and evolution.”

Previous: Love our display!
Next: Enrichment is grrr-eat!