DZG’s new baby yellow-breasted capuchin has been called Doyle  after a character from the hit 1990’s sitcom Father Ted. 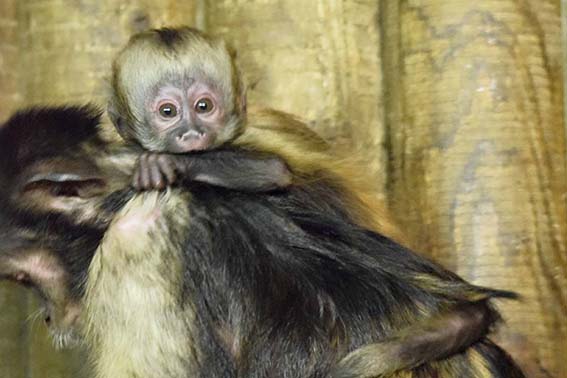 Thanks to Chris Rockey for these beautiful shots, above and below, of baby Doyle

Upper Primates Keepers came up with the name before having chance to find out if the youngster was a boy or a girl to follow on the Father Ted theme. A couple of other male capuchins names, Ted and Dougal, were also inspired by the Irish comedy.

Section Leader Pat Stevens said: “Father Ted is a popular programme amongst Keepers in Upper Primates and we chose the name Doyle after the surname of the show’s housekeeper.

“We haven’t been able to determine Doyle’s sex as yet, so we may have to add the title Mrs in front if it turns out to be a little girl!” 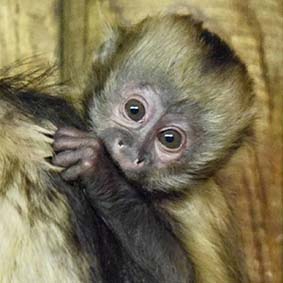 The yellow-breasted or golden-bellied capuchin is a highly social and intelligent monkey which lives in groups of up to 30 individuals. Group members communicate using barks, growls, screams, whistles and chattering.

It is now thought that just 300 individuals survive in the wild, making the species among the world’s most endangered primates.

The species, listed as Critically Endangered on the International Union for Conservation of Nature’s Red List of Threatened Species, is subject to very high rates of habitat loss and is heavily hunted.

Father Ted was originally aired on Channel 4 over three series from April 1995 until May 1998 for a total of 25 episodes. Set on the fictional Craggy Island, the show starred the late Dermot Morgan as the eponymous Father Ted Crilly, who lived in the parochial house with fellow priests Father Dougal McGuire (Ardal O’Hanlon), Father Jack Hackett (Frank Kelly) and their housekeeper was Mrs Doyle, played by Pauline McLynn. The show received multiple BAFTA awards and remains one of the most popular sitcoms in Irish television history.