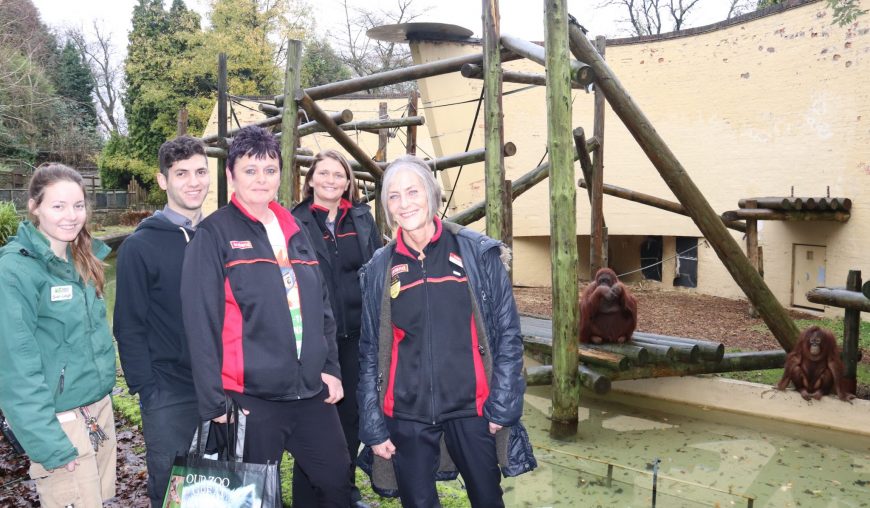 The team from Iceland in the Churchill Shopping Centre has committed to helping the zoo’s orangs as an extension of the eco-friendly chain’s national campaign to save critically-endangered orangs in the wild.

For the next year, Store Manager Kirsty Davies and her team have offered to run raffles and competitions in the branch each month to provide food and enrichment supplies for our four Bornean orangutans as well as funds towards our £800,000 appeal.

Senior Primate Keeper Sian-Leigh Simner introduced Kirsty and her colleagues Angelo Antoniou, Jane Beardsmore and Deborah Samuels to orangs Benji, Jorong, Jazz and Sprout and the group brought along donations of sheets and bedding for the great apes to play with.

Iceland is the first major UK supermarket to cut palm oil from all of its own-brand products in a bid to halt the ongoing destruction of tropical rainforests in south-east Asia where Bornean orangs are amongst the wildlife facing extinction. Its Managing Director Richard Walker visited Borneo last November to see the impact of deforestation for himself.

Kirsty, who has worked for Iceland for 14 years, said: “I was at our national conference when Richard was talking about helping orangs and the devastation caused by expanding palm oil plantations and it occurred to me that we are right nextdoor to the orangutans at Dudley Zoo and could do something to help them.

“Each month we plan to raise funds for the zoo’s orangs and awareness of the plight of the creatures in the wild. The business, our 64 staff and customers in Dudley are right behind us and keen to help in whatever way they can.” 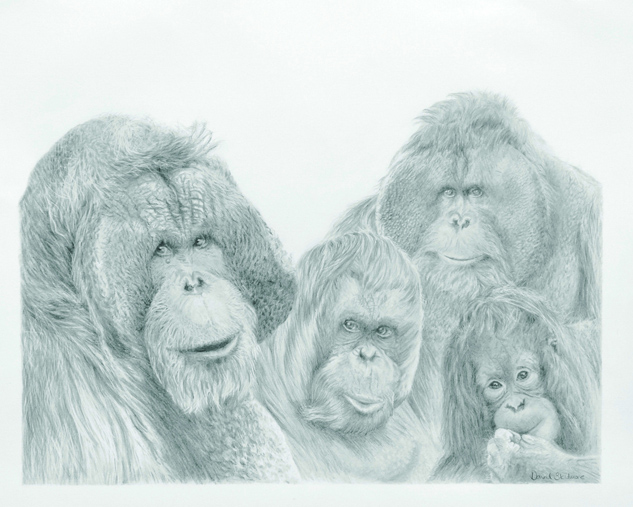 The branch is also promoting the 100 limited edition canvasses of our orangs, drawn by Bromsgrove artist David Skidmore, which are being sold exclusively at the zoo in aid of our appeal to build an entirely separate outdoor orang exhibit.

Deforestation to make way for palm oil plantations in Indonesia and Malaysia destroys the habitat of orangs and other wildlife.

Palm oil is currently found in more than half of all supermarket products, from bread, pastry, biscuits, cereal and chocolate to soap, cosmetics, detergent and biodiesel.

Iceland’s pledge is that by the end of 2018, 100% of the supermarket’s own brand food lines will contain no palm oil (substitutes such as rapeseed and vegetable oils will be used), reducing demand by more than 500 tonnes per year.