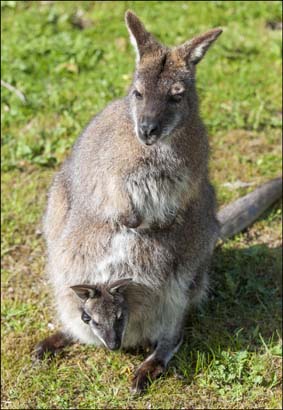 The joey, who has just left his mum Tazs pouch, has been named after the Australian No.1 on the first day of the championship at the All England Club.

DZG Team Leader Jay Haywood said: The joey has recently started leaving his mum’s pouch and after we determined he was a boy, we needed a name for him.

“We’ve now decided on Bernard, and thought naming him after an Australian star of Wimbledon would be an ace idea!

Four-month-old Bernard and his five-year-old mum, Taz, came to DZG in May from Woburn Safari Park. 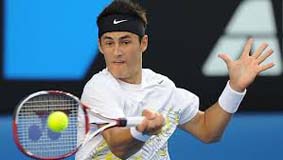 His 22-year-old namesake Bernard Tomic, pictured above, was due to play his first-round match against German Jan-Lennard Struff at 2.30pm today.

And, if successful, the player ranked number 26 could go on to face titleholder Novak Djokovic in round three.

Australia – the native home of Bennett’s wallabies – is set to field its biggest contingent at Wimbledon for 20 years.

Not since 1995, a generation ago when Boris Becker, Pat Cash and Davis Cup captain Wally Masur were gracing the famous grass courts, has Australia boasted such strength in numbers at SW19.

Welcome Bernard – We think your new name is a winner!

Previous: Ten out of ten!
Next: Baby boom!