Staff are cracking open the bubbly after a hearty increase in visitor numbers. 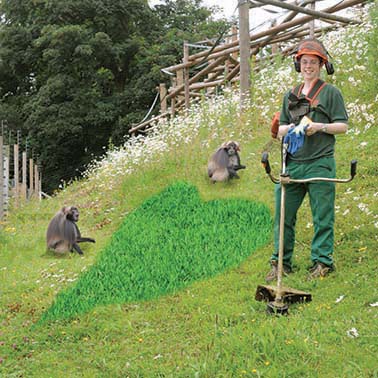 CEO Peter Suddock said:?Its fantastic news; weve seen a steady year-on-year increase since 2008 and given the current economic climate this is marvellous.
He added:?The big rises of double figure increases have come in the past two years and are due to investment across the site, rebranding and our website activity which has gained us access to a whole new market.
In the past decade more than £1 million has been spent across the 76-year-old organisation and a further £3.05 million is in place to fund a four-year programme (completion 2015/16) of which work is already underway.
Mr Suddock added:?DZG pioneered the initial develpment of Castle Hill through its own funds  a rare situation in todays economy, and were set to go from strength to strength. These are exciting times.

£7,000 refurbishment and extension to triple aviaries launched May 2013

Penguin Bay  a £40,000 walkthrough experience with glass viewing panels at poolside, plus a beach opened May 2012 offering visitors a chance to get close to the site’s 70-strong group  the UK’s largest colony of parent-reared rare Humboldt penguins

PLUS: Chairlift  launched August 2012 – the country’s only vintage chairlift (1958) it was the first passenger-carrying aerial ropeway to be installed in England and transports visitors from the zoos lower zone to the 11th century Dudley Castle on the upper level, within a two-minute journey

Finance for the £117,000 refurbishment project of the chairlift was via a £1.15 million bid for Heritage Lottery Funding, which will also see the restoration of four of the sites 12 listed Modernist structures which form part of the worlds largest single collection of Tect
Previous: Calendar raises £600
Next: On yer bike!