We’ve welcomed back a venomous species to the Reptile House for the first time in 26 years. 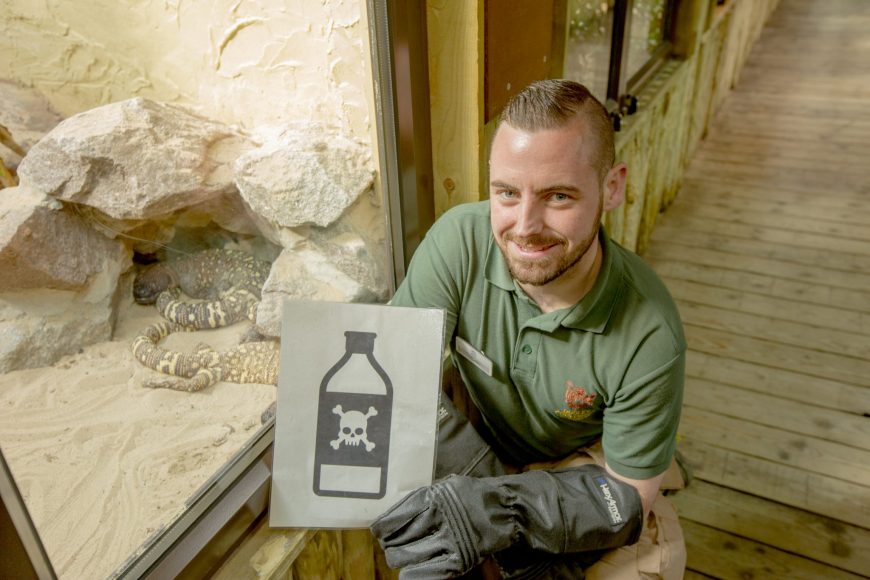 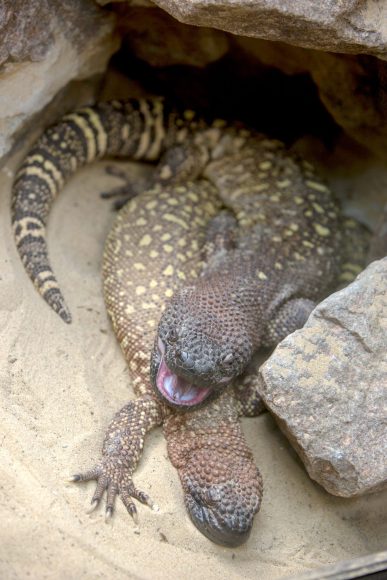 Senior Keeper, Sam Grove, pictured above, said: “Their venom glands are located in their lower jaw and they deliver the toxin through chewing.

“Although they look quite a docile species, we do have to have additional precautions in place, including two staff members being present at all times whenever we go into their enclosure, as they’re known to have a strong bite.

“And we always wear thick protective gloves and use a plastic shield to form a barrier between them and us.

“Plus there are two entrance points in their enclosure, so if they’re blocking one, we can access from another direction without disturbing them, but all the safety measures we have in place keep all risk to a minimum.”

As their name suggests Mexican beaded lizards are native to central and western Mexico and have raised hard bead-like scales all over their body, which is varying shades of black and yellow.

Found in the semi-arid rocky regions, they have a stocky tail to store fat reserves and a similar to snakes, their forked tongue flicks in and out to smell.

Sam added: “They’re really fascinating creatures and since starting to work in the Reptile House, it’s always been my goal to bring in venomous species and hopefully the aim is to increase this stock in the future.”

Over the last few months every enclosure in the Reptile House has undergone a revamp, with work on the final exhibit set to complete imminently.

As part of the refurbishment, the four Philippian Sailfin lizards will relocate to the newly decorated enclosure, while the Frilled lizards, who are currently off show, will return to vacated area.

See the Mexican beaded lizards in the video below…