Keepers have been carrying out DIY duties to stop tapirs Meena, Chico, Ronnie and Tallulah munching on trees in their paddock. 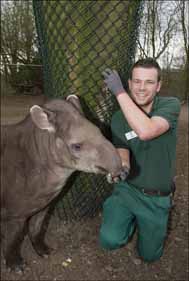 Metal chain link has been fixed around the base of the beech trees in the enclosure, replacing worn out wooden protectors, to prevent the four Brazilian tapirs from chewing the bark.

Assistant Curator Richard Brown said eating bark could make the tapirs ill, which is why it was imperative the work was carried out as soon as the wear and tear was spotted. 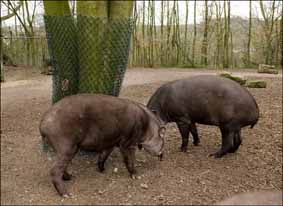 Previous: Tiger who came to Tea
Next: Gibbon by moonlight