One of the worlds most recognisable and iconic exotic birds, the colourful Toco toucan, is settling in at DZG. 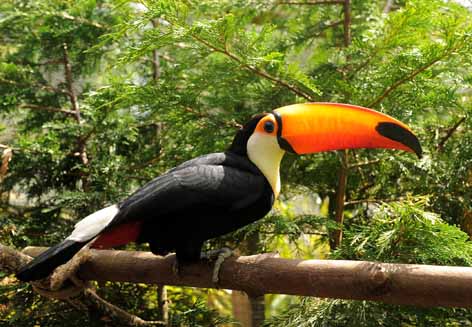 The male Toucan has not yet been named but it is expected to draw the crowds, and the hunt has already started for a female to form a breeding pair.

Curator, Matt Lewis, said:?Toucans are very popular with the public. The species featured prominently in Guinness advertisements over the years, and people recognise it instantly.

The birds large bill is used in mating rituals, when it catches tasty morsels of fruit and pitches them towards its intended partner.

The bill is very light, and made of honeycombed bone. It might look impressive, but is mainly used for reaching fruit and has little use for fighting off predators.

Toucans originate in the South American tropical rainforest, where the indigenous people view them as sacred.

CAPTION: The colourful Toco toucan that is settling in at Dudley Zoological Gardens.