Eight tortoises are used to stepping on the scales for a fortnightly weigh-in. 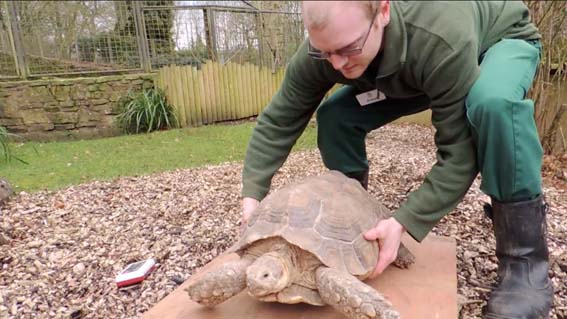 Every two weeks Ungulates Keepers weigh six African spurred tortoises and two Hermann’s tortoises to make sure they are healthy.

Ungulates Section Leader, Jay Haywood, said: We weigh them to see if there is any variation in their weight which helps us to monitor their health.

If they ever become ill it is very difficult to tell by just looking at them if they have lost weight, so we put them on the scales every fortnight.

The African spurred tortoises are so similar in appearance staff struggled to tell them apart so marked them with a variety of colours which has made it easier to identify the animals for weighing.

Jay added: Its so much easier to check their growth now we have colour coded their shells with a dab of paint.

African spurred tortoises originate in the deserts of Africa and can grow to three feet in length.

They are also known as Sulcata Tortoises (Sulcata means furrowed and refers to the ridges on their scales).

Tortoises are an endangered species due to demand for fashion accessories and ornaments made from their shells.

Take a look at our short video below to see Keeper Adam Davey explain the importance of the tortoise weigh-ins.