DZG is included in a top ten list released today of species most reliant on zoos for survival.

Compiled by The British and Irish Association for Zoos and Aquariums (BIAZA) the list features animals on the brink of extinction.

DZG’s conservation work with the white-clawed crayfish comes in at the number two slot on the list which was compiled using data from BIAZA conservation experts across the country, and highlights the best examples of how zoos are safeguarding the future of our planets wildlife and habitats.
DZG CEO Peter Suddock said: “Sadly 95% of the population of Britains only native freshwater crayfish has now been lost and DZG is among a team of zoos leading the rescue of this rapidly-disappearing species.
“The top ten list highlights just how vital good zoos are in securing a future for these often little known but hugely important creatures.”
Powerful forces for conservation, good zoos offer some of the worlds most extraordinary species a route to survival.
Mr Suddock added: “This is just one of a series of conservation programmes for highly endangered native species we run at DZG, and while they may not appear to be our most glamorous projects they are certainly vital to the whole eco-system.” 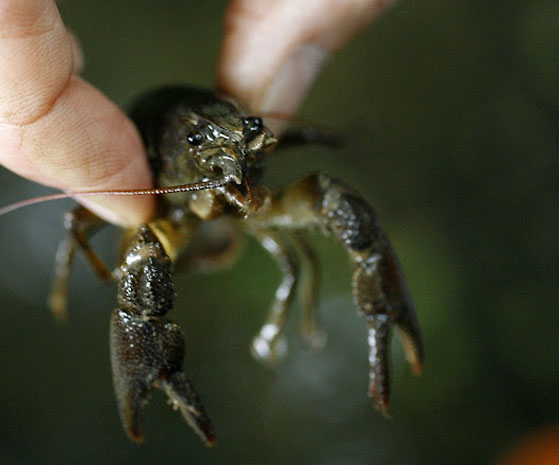 BIAZA Field Programmes Committee member Dr Andrew Marshall said: This list highlights ten prevailing examples of how zoos are working to save these and many other species from extinction. Without the valuable conservation and breeding work of many of our member zoos and aquariums, many at risk species such as these may be lost to extinction forever.

Drawing up the shortlist was not straightforward because there were hundreds of zoo-funded conservation projects to choose from; however we put together strict criteria and we hope our final shortlist will draw attention to just how important the work of zoos is.

The criteria for selecting the top ten included choosing species associated with ongoing field initiatives by zoos. Particular importance was given to initiatives which included a management role, rather than just providing funds. Species chosen are currently listed as Endangered, Critically Endangered or Extinct in the Wild on the International Union for Conservation of Natures (IUCN) Red List. Priority was also given to species conservation projects that include habitat, education and/or livelihood development.

The top ten list of species most reliant on zoos underlines the importance of zoos not only in captive breeding for reserve populations and reintroductions, but in the role they play in conservation in the wild from fund-raising to research, education and support for local communities, as well as wildlife habitats.

1.  Mountain chicken  one of the worlds largest species of frog and critically endangered.

2. White-clawed crayfish  around 95% of the population of Britains only native freshwater crayfish has been lost.

3.  Blue-crowned laughing thrush  only 250 mature birds of this Chinese species left in the wild.

Previous: Grasping the nettle
Next: Nick gets sand pit