History was made today at DZG with the arrival of two female tigers. 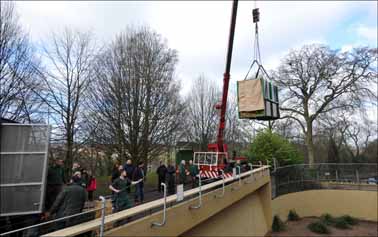 The youngsters were transported into the big cat enclosure by crane in a manoeuvre that involved more than a dozen senior keeping staff and has taken almost a year of negotiations between studbook keepers across Europe.

CEO Peter Suddock said: “We are just over the moon with the new girls, they are beautiful, and we are delighted to have tigers back in the breeding programme at DZG once again.” 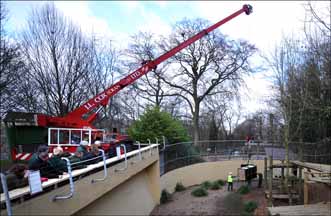 Mr Suddock added: “It is the first time in 75 years since the zoo opened to the public that we have moved more than one big cat at the same time into this enclosure. It was an incredibly detailed move and involved careful manoeuvring of the tiger crates into the enclosure using a full size crane.”
The operation took just over two hours to complete by which time the girls were settling into their new home in one of the site’s Tecton buildings. 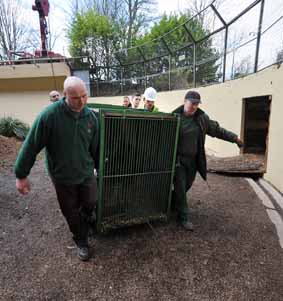 Mr Suddock said: “The tigers have moved into one of the original big cat enclosures which were designed by renowned Modernist architect, Berthold Lubetkin, when the zoo opened in 1937.
“It is wonderful to see them in there, and hopefully, within the next year we will have a Sumatran male to carry on our breeding programme. 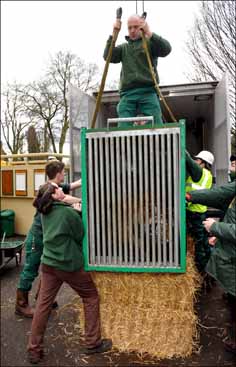 “We are just delighted to have such an important and rare species back at DZG.”
Tschuna and Daseep will spend the rest of the week off-show to the public and keepers hope to introduce them to visitors early next week.
DZG has one of the most successful breeding rates for this highly endangered species, having bred eight cubs in the past decade. All youngsters have gone on to found family groups at collections across the UK and Europe.

CAPTIONS: The tigers are manoeuvred by crane  and keepers  into the Tecton big cat enclosure.