Footage of the transfer of Sumatran male tiger, Joao, into his Tecton enclosure has been made into a video to show the tricky manoeuvre to install one of the world’s rarest big cats into his new home. 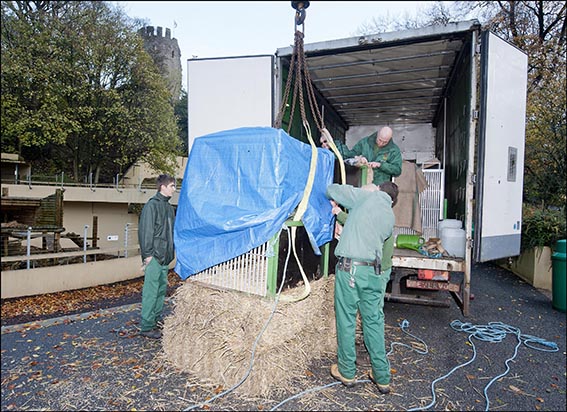 The film shows Joao being lowered by crane into Lubetkin’s Modernist enclosure as staff steady the crate and move it into position to allow access to the internal dens.

The whole operation took just under an hour and staff were then able to concentrate on the important task of introducing 20-month-old Joao to his new surroundings.

Joao, who travelled over sea and land from his native Krefeld Zoo, in Germany, will join female, Daseep, as part of a major international conservation programme for this critically endangered sub-species.

DZG holds an impressive breeding record for Sumatran tigers; eight cubs born at the Castle Hill site between 2000 and 2005 increased the world population of the sub-species by two per cent and went on to boost programmes across the world.

Assistant Curator, Richard Brown, said: We are all delighted and relieved that Joao is here at last. He is a superb tiger and we are very hopeful he will be out in the external enclosure to meet the public very soon.
Joao will be held off-show to the public until next week to allow veterinary staff and curators to monitor his behaviour and introduce him to Daseep.
Watch footage of Joao’s arrival here:-
Previous: Primates rescue Pudsey!
Next: A marriage made at DZG!