A trio of bears has relocated to DZG  but there’s no call for a new enclosure, they’re made of pottery and were donated by a Kingswinford woman who is clearing her home before downsizing. 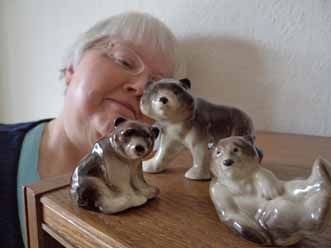 Beverley Knight, of Moss Grove, says the bears were given to her late husband, Peter, as a child during a visit to DZG, possibly in the 1940s.

She said: “Peter was born in 1939 and he had the bears from an early age. No-one knew for sure why they were given to him, but we believe it may have been part of a promotion at the Zoo.

“He always treasured them and kept them on a shelf in his bedroom.

“When we married they came with him and moved to a shelf in our bedroom. I’ve always had a soft spot for them, but I am downsizing and really wanted them to go to a good home.”

She added: “When I contacted Zoo staff they were very interested and came over to my house to have a look at them.”

DZG Head of Media and Communications, Jill Hitchman, said: “The bears are well made and consist of a family group of mum and two cubs.

“We’ve had a quick look in our archives to see if there is any mention of pottery bears being handed out to visitors in the Zoo’s early years, but haven’t found anything as yet.

“We’ll certainly be giving them a new home  at the moment they’re settling into the Press Office where they’re sitting on my desk, but we hope to make them part of a permanent display.”

Jill added: “We’d like to say a very big thank you to Beverley for her generosity. I understand her husband’s family were regular visitors to the site and hope she’ll come and see us, and the three bears, soon.”

CAPTION: Who’s been sitting on my shelf?: Beverley with the three bears she has donated to DZG.