Our latest set of lemur twins have been named Itzy and Bitzy  due to their teeny size. 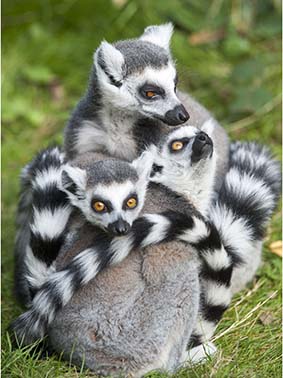 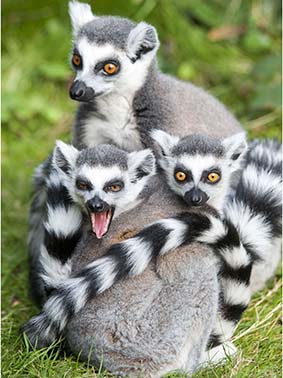 Upper Primates Keepers thought the names would suit the twin ring-tailed lemurs as they are still tiny despite being just over six months old.

The youngsters were born on April 21 to mum Pheobe and dad Frank. They are doing well and getting to know their siblings – older brother twins Nelly and Kelly, big brother, Spock and big sister, Freya in the mixed lemur exhibit.

Section Leader, Pat Stevens, said: Even though they were born six months ago the pair are still very small and the names Itzy and Bitzy seemed to suit them.

We haven’t been able to determine their sex yet so going for unisex names was a perfect choice.

The name ring-tailed is derived from the characteristically black and white ringed tail which these highly social animals use for keeping in touch and signalling to each other.

They live in groups of up to 30 individuals in which the females are dominant; a trait common among lemurs.

To keep warm and reaffirm social bonds, groups will huddle together forming a lemur ball.

Lemurs are unique to Madagascar

You are likely to see ring-tailed lemurs sitting on the ground, facing the sun with their arms outspread sun worshipping!

Previous: Put yourself in the picture!
Next: Bruce, meet Giggles!