It appears a collection of popular creatures have vanished from the zoo without a trace – a community of gnomes from the 70s and 80s. 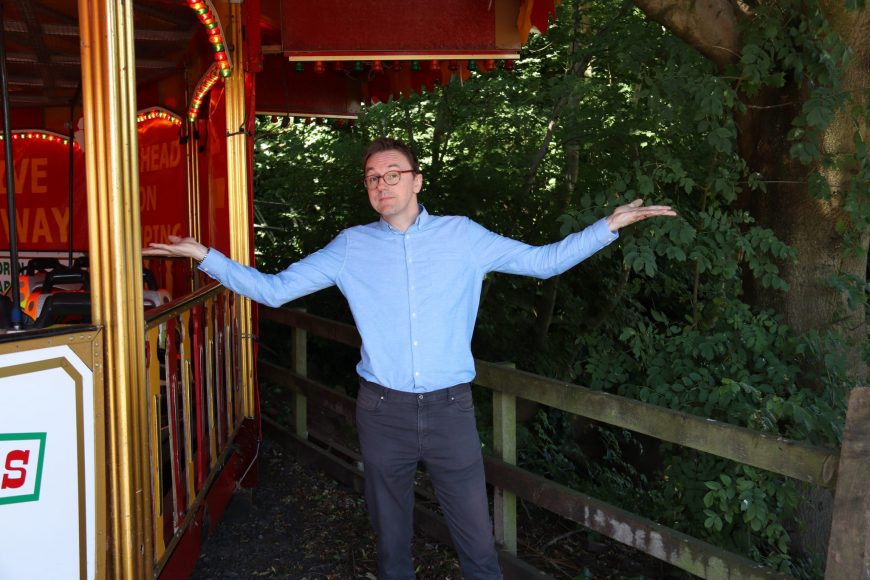 Several members of staff remember Gnomeland, a small system of caves lit by lamplight and populated by gnomes, but no-one has a picture… so we’re asking our visitors for help.

Our search for photographic evidence of the mysterious gnome attraction was triggered by Senior Journalist Gavin Jones from the neighbouring nostalgia newspaper the Black Country Bugle.

During a recent visit to the zoo to interview a former big cat keeper from the 1960s, Gavin enquired about the caves and posed for a picture near the fair where he recalled the gnomes residing.

Gavin, who lived in Dudley as a youngster in the 1970s and 80s, said: “I have great memories of a community of gnomes stood behind glass or wire in small alcoves that seemed to go back into the hill, giving the impression that there was far more to their little world than the bit we’d been allowed to see.

“Best of all though was the gnome band. Five or six of them, all playing instruments and bouncing to the beat of FBI by The Shadows.

“I did appeal to the Bugle readers to see if they could come up with a photo but nothing has surfaced, so I’m hoping the zoo visitors come up with the goods.”

Zoo Director, Derek Grove, said: “People remember Gnomeland and talk about it, but there’s a definite gap in our archives as we don’t have a photo of the popular exhibit from the past.

“Hopefully one of our visitors will contact us with a picture and we can fill that void in our records and bring back some happy memories for Gavin and the rest of the people who had a soft spot for our old gnomes.”

Anyone who can help with our appeal for photos of Gnomeland can send them to photos@dudleyzoo.org.uk