A unique piece of colourful artwork, created by DZG’s arty chimpanzees, is now taking pride of place in a home in Wordsley! 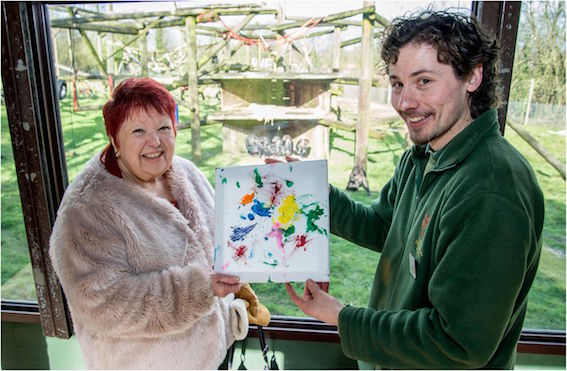 Zoo Director, Derek Grove, randomly drew Thelma Thomas as the winner of our competition, which was open to anyone who renewed or adopted one of the chimp girls in the run up to Christmas.

And chimp-fan Thelma, whose son, Simon, has adopted Barbie for the last eight years for her, was delighted to receive the canvas and hear more about our ape group from Keeper Shaun Crompton, pictured above.

Thelma, who also took part in meet and greet with our seven girls in 2009, said: “I’ve always loved chimps since I was a little girl. I’ve always been fascinated by them, especially their hands and fingernails. 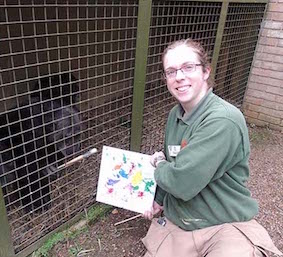 “When my son told me I had won the painting, I thought it was a joke at first. I’ve got to find somewhere for it now – it will certainly be talking point for people when they visit!”

All seven girls had a go at painting the canvas, although Malaika did the most – pictured right with Section Leader, Nicola Wright.

Keepers first tried the apes with paints after buying a children’s art kit as a birthday present for Banika and quickly discovered some of the girls had a natural artistic flair!

As well as Barbie, Malaika and Banika, we also have Mandy, Fanny, Binti and Mali.

Previous: Fancy waking up the zoo?
Next: Wheely good!