Moving our beautiful tigers into Berthold Lubetkin’s iconic Tecton enclosure took us on a trip down Memory Lane . . . 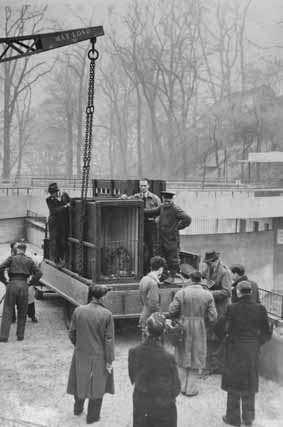 The only time two big cats have been transported together into the Modernist structure was way back in spring 1937 when the zoo opened to the public.

And the manoeuvre was almost identical  only the fashions have changed!   Head of Media and Communications, Jill Hitchman, said: “The manoeuvre, which used a crane, had to be planned down to the finest detail as we had two very important cargoes to move.   “It’s always a nail biting time when you see the crane move into the big cat Tectons as they are quite steep, but we had a brilliant operator and he placed them down so gently you would have thought they were empty boxes.   “I’m sure it was the same story in 1937.”   However, those big cats of yesteryear didn’t have quite the fan base our two gorgeous girls have acquired; in the three days they have been at DZG eighteen-month-old Tschuna and seventeen-month-old Daseep have received emails, tweets and Facebook messages. 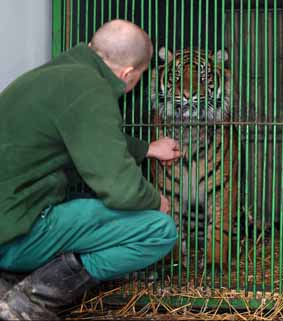 Jill added: “They’re becoming quite famous; we’ve already launched a web-link with Wuppertal Zoo where they transferred from and have done an interview with Radio Wuppertal as locals wanted to know how the journey had gone and how the girls had settled into their new home, and there’s also been lots of press interest in this country – and they haven’t even met our visitors, yet.”   Tschuna and Daseep will enjoy a little weekend R&R until they meet the general public next week.   CAPTIONS: The way we were: transporting a big cat into the Tecton enclosure in 1937. And today’s system: same level of concentration, more casual clothes! 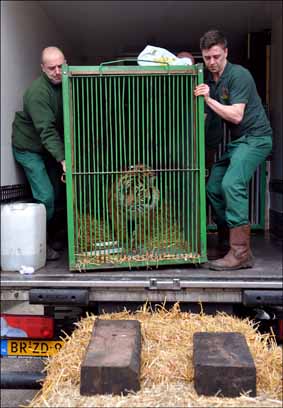 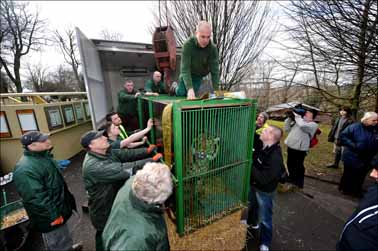 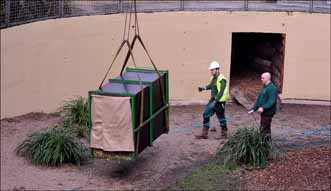 Previous: Tiger twosome settling in
Next: Oh no, here’s the vet!