The 21-month-old male and his three-year-old mate, Daseep, have been dragging recycled Xmas trees around their enclosure and den for the past few days, but have now started taking them into their sleeping quarters at night. 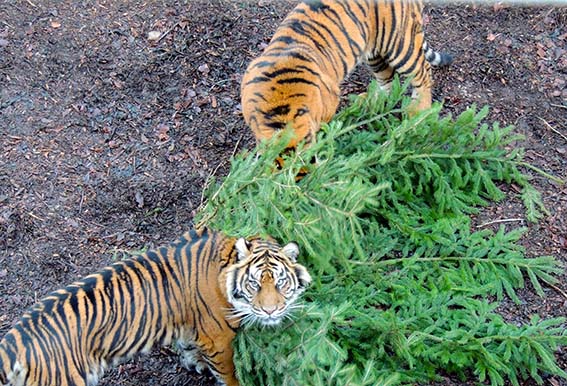 Ungulates Team Leader, Jay Haywood, said: “Daseep and Joao love playing with the trees and have been carrying them around their enclosure.

“However, for the last few nights Joao has decided to drag one indoors to his sleeping den which blocked up the entrance tunnel and meant Daseep couldn’t get past and we couldn’t shut the metal sliding doors behind them because the tree was in the way!”

Eventually Daseep clambered over the tree and keepers ensured the pair were safely locked in before retrieving the fir from the tunnel.

Jay added: “It’s great to see Joao being so playful, but I don’t think Daseep was amused by his antics.”

Watch Daseep and Joao investigate a fir tree in the video below!