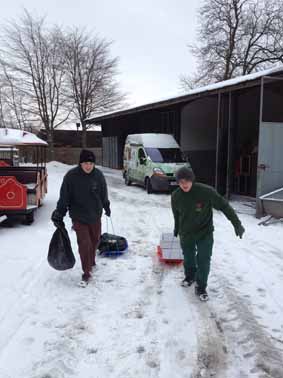 Snow leopards, red pandas and penguins couldn’t wait to play in the chilly white blanket while giraffes, flamingos and lemurs opted for the cosiness of their internal dens.

But it wasn’t all fun and games for staff who struggled to move supplies across the 40-acre site and resorted to using sledges to transport foodstuffs to feed the zoo’s 1300-strong collection.

CEO Peter Suddock explained: “We always heed Met Office warnings and on Friday staff arrived at 6.30am to make the site accessible.   “The snow fell steadily throughout  the morning but by midday it was coming down very heavily and keepers were battling to complete their duties.   “Despite the awful weather conditions we had some visitors on site, mainly keen photographers who wanted to get shots of their favourite species in the snow, but we took the decision to close at 2pm and sent admin, retail and catering staff home as many were reliant on limited public transport. 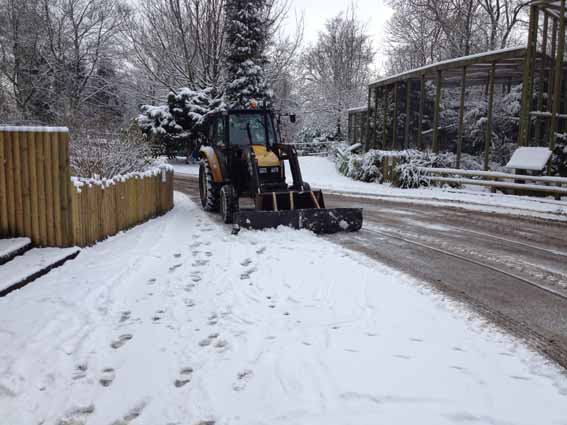 “The light was fading fast, too, which made the final tasks slow, but we managed to get the snow plough around and cleared main pathways and entrances to enclosures and food stores.”

Mr Suddock said the procedure had followed the same pattern across seven decades. 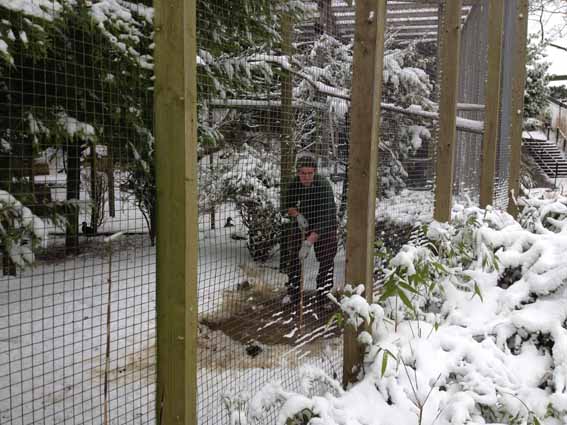 He said: “Since the zoo opened in 1937 we have used manual labour to move food and bedding across the site in the snow.

“It’s a huge, hilly site which is difficult to negotiate in icy conditions, but we always manage to get round it all and ensure every animal is fed.”

One of the first tasks on the upper level of the zoo was to smash through the frozen pools in Penguin Bay and part of the moat around the 11th century Dudley Castle that’s home to a trio of Patagonian sealions.    Elsewhere additional heaters were laid on for meerkats and small primates and warm drinks made for big apes, including two-year-old orang utan, Sprout, who caught her first glimpse of deep snow.

Mr Suddock added: “It’s business as usual for us and lots of the animals love this weather, particularly our young tigers and baby red panda, but others are staying holed up and opting for ‘room service’ until the weather improves!”

Previous: It’s a love-hate thing
Next: The One Show at DZG