Pupils from a Halesowen primary school learnt about penguins and sea lions when they became Iceworld explorers for the day at DZG. 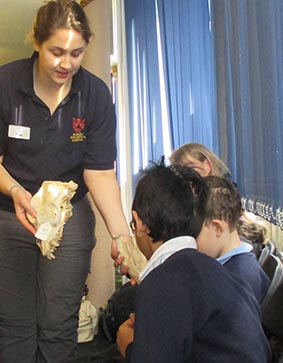 Fifty-nine children from Tenterfields heard all about the extreme habitats of the Antarctica and Arctic during their session in the Go Wild! Theatre with the zoo’s education staff.

During two hour-long workshops, presenters revealed some of the animals that would commonly be found living in the extreme chilly conditions and showed the children bio-facts from some of those residents  including a skull of a sealion.

Pictured right: DZG Presenter, Pam Midwood, shows some of the pupils from Tenterfields Primary School in Halesowen, a sealion skull, during their Iceworld Explorers workshop.