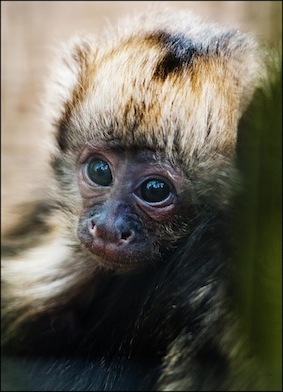 Meet Ted, the tiny rare primate who’s turned out to be a boy!

The yellow-breasted capuchin who was born on April 7 to ten-year-old mum, Dinya and six-year-old dad, Willow has kept keepers guessing until they were able to sex him properly this week!

The critically endangered species now numbers fewer than 300 in the wild.

Upper Primates Section Leader, Pat Stevens, said: “We had to wait until Ted was confident enough to leave his mum for us to be able to confirm his sex.

“At three-months-old he’s now just starting to gain more independence and is beginning to venture off mum’s back and try solids for the first time and we’ve seen him tuck into a piece of banana, which he seemed to enjoy!”

Although Ted’s testing his tastebuds he will continue to feed from mum until he’s around two-years-old.

Pat added: “He seems to have quite a cheeky character, just like big brothers, Spot and Dougal, so I’m sure there’ll be plenty of boisterous playtime in the future between the three of them.”

The group, which also includes female, Holly, is part of a European Species Survival Programme (ESSP) and are on loan to DZG from Rio Primate Centre, where they remain the property of the Brazilian government.

Previous: Cosy croc nest
Next: Leaf it out, Carl!