The playful antics of DZG’s snow leopards, Margaash, Nanga and Makalu, are under observation as part of a university study.

Paige Griffiths is spending 100 hours with our trio observing how they interact with different enrichment smells. 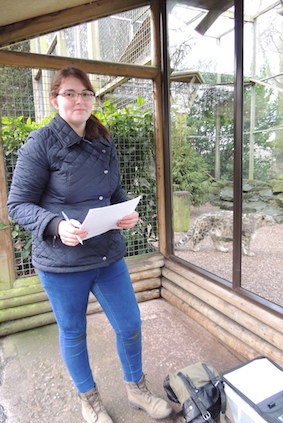 As part of the study, keepers are adding a metre-long green dog rope into the enclosure, which Paige is either leaving unscented or covering with cinnamon or sheep bedding scent.

The 20-year-old, who is studying animal care with animal behaviour at Staffordshire University, based at Rodbaston College, said: “The first type of rope that went in with the snow leopards was unscented.

“Nanga and Makalu went straight to it as soon as they were let out and had a game of tug of war, before they took it up to the top platform and Makalu played with it on his own for about an hour and 10 minutes.”

Over the next few months, Paige will be recording data on time sheets, about how long each cat interacts with the rope as well as how they behave with it, whether sniffing, playing, biting or chewing.

She also has to film the first few minutes of every interaction, before collating all of her data into a final dissertation, which DZG will get a copy of.

Paige, from Sedgley, said: “I’m going to observe them for a couple of days a week, every three weeks and repeat the three different types of rope scent throughout the five months, but not always in the same order.

“I’m also hoping to be able to use the same piece of rope throughout the whole time, so the keepers are retrieving it at the end of the day and I’m washing it in water

“I’m looking forward to the rest of the study to see how they react to the different smells, as they were very active to just an unscented one.” 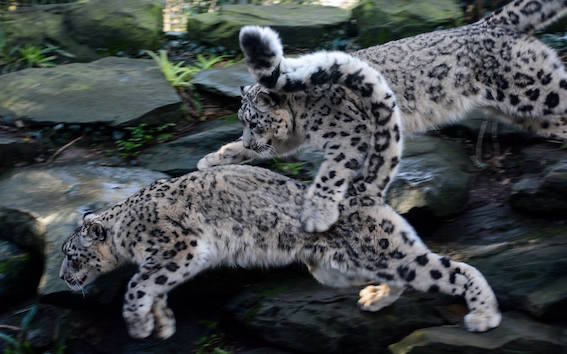 DZG Registrar and Research Co-ordinator, Dr David Beeston, said: “We’re really pleased that Paige proposed this project as it may prove one way or the other to be a really useful enrichment tool, which we could possibly use on a regular basis for the snow leopards, as they seem to be reacting really well to it at the moment.

“We wish her well with her study and look forward to receiving the final results.”

Thanks to Steve Weaver for the playful pic!