Keeper Josh Luxton is itching to try out new techniques with our sea lions after attending a workshop in Wales. 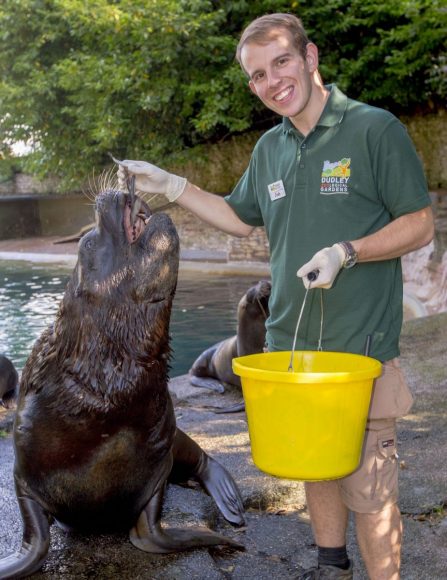 The 24-year-old keeper has recently returned from the BIAZA (British and Irish Association of Zoos and Aquariums) Seal and Sea Lion Workshop which took place at the end of last month at Welsh Mountain Zoo near Colwyn Bay.

Josh said: “It was great meeting other seal and sea lion keepers from around the world and sharing the ways we care for these wonderful creatures.

“The workshop gave me plenty of new ideas for enrichment, food preparation and general training and it will be interesting to put these into practice.”

And Josh is planning on sharing his success stories with our visitors in the coming weeks and hopes to talk about what he has learned on a Facebook live broadcast alongside our male sea lion, Oba.

Josh and other keepers on the section have a terrific relationship with 18-year-old Oba, who weighs in at 37-stone.

They have trained him to open his mouth, show his flippers, stand on a podium and lie down so they can carry out health checks on him.

We look forward to hearing your progress, Josh!

Previous: Leaf it to us!
Next: Handmade card for Kubwa!