Keeper Stephanie Sawyer is knuckling down to her studies as she begins her Diploma in the Management of Zoo and Aquarium Animals (DMZAA).

The 25-year-old is the latest DZG recruit to undertake the two-year DMZAA qualification, which covers all aspects of zoo life, from conservation, care, nutrition and enclosure design. 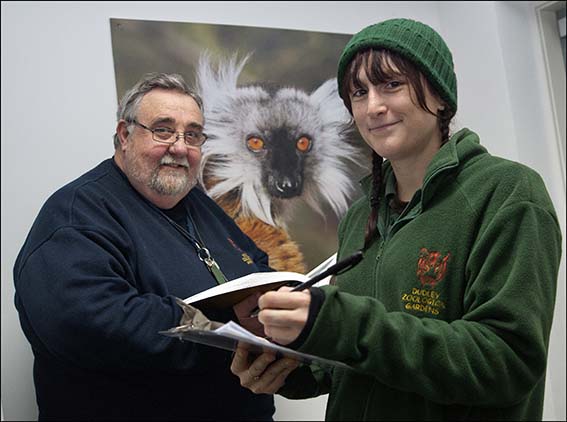 Stephanie, who is currently dividing her time between a virtual classroom and her daily hands-on work schedule, said: “It’s going well so far and I’m learning quite a lot. It’s hard work having to juggle both work and coursework, but I tend to leave all my studying to my days off, which allows me to really concentrate on it.”

The course, which is overseen by DZG’s Registrar and Research Co-ordinator and Regional DMZAA Co-ordinator, Dr David Beeston  pictured above with Stephanie  reinforces the high quality practical skills required here at DZG. 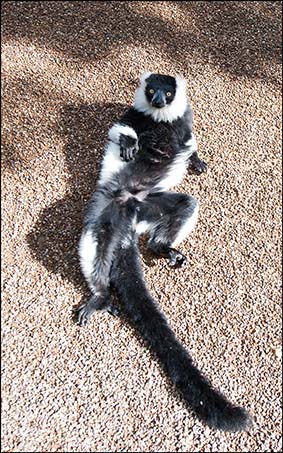 The first year includes ten monthly assignments, which are uploaded online and marked electronically, a five-day residential course at Sparsholt College in Hampshire and end of year exams in September.

Stephanie has also recently completed her first year research project, a short taster of the more in-depth research project undertaken in the second year and focused on black-and-white-ruffed lemurs in Lemur Wood.

Stephanie added: “We had to collect eight hours of data, record it, put it into graphs and then draw conclusions from it.

“I decided to focus on the black and white boys and see how they reacted following Aramis’ departure.

“He was the alpha male in the group, so when he was moved to Howletts Wild Animal Park, I wanted to see how the rest of them would organise themselves.

`’We thought the leader would have gone to the second in command, who is Porthos, Aramis’ brother, but the conclusions I gathered were that they seem to still be working it out, as there is no clear alpha male.”

Dr Beeston, said: “The DMZAA is demanding on our students as they are given a new assignment every month and are expected to spend around 30 hours on each one, as well as carrying out their day-to-day duties.

“Stephanie has got off to a flying start, but as all of our keepers undergo this qualification, they are able to mentor the students and point them in the right directions, so there is always someone on hand to help.”

Previous: Rare primate birth
Next: On your marks, Carlo!