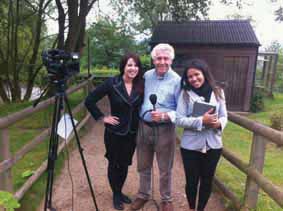 Amani and Victoria filmed around the site before interviewing CEO?Peter Suddock and Head of Media and Communications Jill Hitchman about the project which is due to start next spring.

Amani said:?”We were both fascinated by the history of the Tectons and wanted to incorporate the HLF programme into a serious news piece we were asked to complete as part of our final post-grad studies.

“We spent about three hours interviewing and filming then went back to the studio at UCE Birmingham to edit.”

She added:?”We’d like to say a mega thanks to everyone who made the filming possible. We had a great time filming at DZG.”

Jill said:?”Amani and Victoria had both done a lot of impressive research on the Tectons before they came on site and put together some interesting footage on the project.

“They enjoyed seeing various animals, but the highlight was the moment they came face to face with three very curious Asiatic lions when they featured the Tecton birdhouse, incorporating Lion Ridge, as a backdrop for their interviews. They couldn’t stop smiling after that!”