Female Sumatran tiger, Daseep, stepped into the limelight today as part of a major photographic exhibition in Central London highlighting the plight of some of the world’s rarest animals. 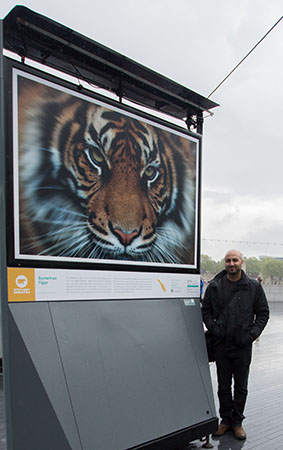 Daseep takes centre stage in Spotlight Sumatra which focuses on vulnerable species such as the orang utan, one-horned rhino and the iconic tiger.

He said: “Seven years ago, when I bought my first camera, I dreamt that one day I could create images that capture the essence of the tiger, images that would show their astonishing presence, in a bid to save them.

“Today that dream became a reality, when I saw my images of Daseep, alongside those of world-renowned photographers near Tower Bridge, in London.”

He added: “Seeing Daseep, a tiger I have worked closely with the last two years, as the symbol of Sumatran Tiger conservation was a proud moment.

“I’d like to say thank you to Peter Suddock, Jill Hitchman and all the big cat keepers at DZG and hope they feel as proud as I do.”

DZG Head of Media and Communications, Jill Hitchman, said: “When Tal first approached us Daseep had recently arrived at DZG so he really was in at the very beginning of her story.

“He spent many long hours on site waiting for the perfect shot and built a strong relationship with Daseep, who truly is a special tiger.

“Some of his shots are incredible and we installed an outdoor gallery of his work throughout last year to showcase his work, which the visitors loved.”

She added: “We are all delighted that his image of Daseep was chosen to highlight such a major conservation issue and will be going along to see it for ourselves later in the month.”

Launched by the Sumatran Orang-utan Society, Spotlight Sumatra runs until May 31 at More London Riverside, in the shadow of Tower Bridge.