We’re swapping one of our Dudley-born sisters for one of the Benidorm brothers to make a double love match, which experts say will form two genetically important pairs.

Nine-year-old male Santiago, pictured right, has already arrived at DZG from Terra Natura Animal Park and has been introduced to his new mate, our nine-year-old female Francisco.

And very soon our 10-year-old female Salvador, Francisco’s sister, will be jetting out to Terra Natura to join Santiago’s brother, Harper, who is nine.

DZG’s Registrar and Research Co-ordinator, Dr David Beeston, said forming two breeding pairs from the Spanish brothers and Dudley sisters was not only a wonderful story, but also highly significant for the vulnerable species.

He said: “It is unusual to be forming two breeding pairs from a set of brothers and our two sisters but as it happens these particular boys and girls are all genetically important.

“The exchange has been arranged by the species co-ordinator Susan O’Brien, who is based at Dublin Zoo, and it will create two valuable breeding pairs.”

Keepers have been slowly introducing Santiago to Francisco and said the Spanish newcomer was settling in very well.

The Goeldi’s monkey is a small primate is found in the tropical forest of Columbia, Bolivia, Brazil and Peru.

The species is listed as vulnerable by the International Union for Conservation of Nature (IUCN) due to the threats to their habitat by logging, farming and mining fuel and minerals. 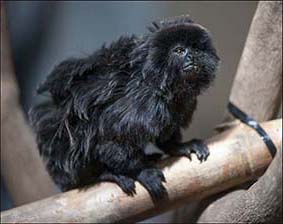 Goeldi’s monkeys are capable of horizontally jumping a whopping 4m, the equivalent of an average sized man jumping 24m!

The species was discovered in 1904 and named after Émil August Goeldi, a Swiss/Brazilian naturalist

Previous: Pitter patter of penguins!
Next: Keeping is in the family!