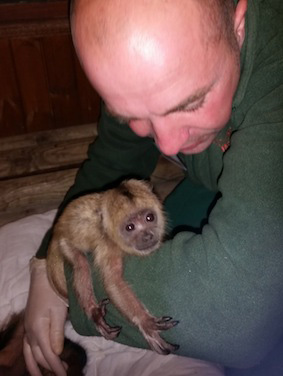 Keepers sexed our newest black howler monkey after the cheeky small primate snuggled into the arm of Assistant Curator Richard Brown during a routine health check of mum!

Upper Primates Section Leader, Pat Stevens, said: “The vet sedated Avyanna to carry out the quick check, but she was still carrying the baby on her side.

“While she was lying down on a duvet, the baby decided to crawl off mum and began making his way up Richard’s arm and then snuggled into his fleece, where we were able to confirm he is a male  that’s Avyanna’s fourth baby boy!”

While the newborn was off mum, zoo vet Peter Stewart also microchipped him before he was returned to Avyanna so that he was back on her side when she woke from the sedation and none the wiser that they’d been apart.

Staff are now busily thinking of names for the youngster, who was born on September 17 to Avyanna and dad, Dargie and joins big brothers Arie, Becks and Tyson in the Small Primate House.

Part of a European studbook managed breeding programme, black howler monkeys are one of the largest primate species in Central and South America.

Previous: Welcome, Icarus and Kinich!
Next: Spotlight on Tecton progress