The process has been slowly monitored by DZG curators and big cat keepers over the last few weeks with parents Nanga and Margaash reintroduced for short stints before allowing the trio to come together.

And staff couldn’t be happier with the introduction.

Curator Matt Lewis said: “It couldn’t have gone better. We allowed mum, Nanga and dad, Margaash to greet each other first before letting out Makalu.

“Dad soon went up to his favourite platform at the top of the enclosure, but then ventured down and went up to the cub and gave him a friendly sniff greeting. 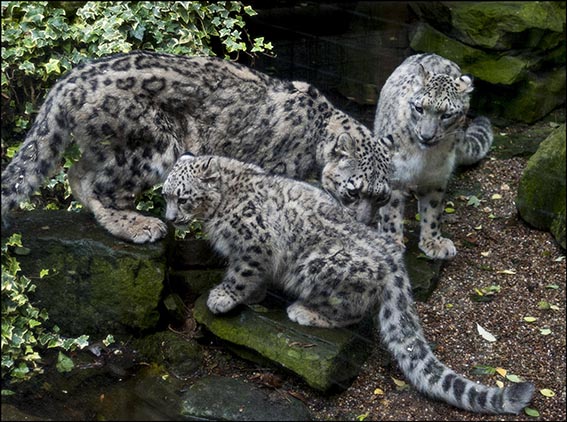 “Makalu then did a double take when he saw mum, as I don’t think he had realised mum and dad were both outside with him at that point.

“It then began raining quite heavily, so Nanga, sensibly went and sat inside the doorway, but kept a close eye on the two boys out on their own until she went into the covered den, which was a really positive reaction that she felt confident enough to leave them alone together.”

Nanga and Makalu have been separated from Margaash since the cub’s April 17 birth.

For the last month keepers have been rotating outdoor access for the trio, so that they all got to enjoy their outdoor enclosure.

But staff have had to modify the enclosure with Makalu-friendly ramps from the enclosure’s high platforms to the floor, as the mischievous six-month old worked out how to climb up to them, but couldn’t get back down!

Previous: Welcome, Icarus and Kinich!
Next: Spotlight on Tecton progress