Card collectors and youngsters from around the UK have been snapping up two sets of Top Trumps featuring DZG’s awesome animals. 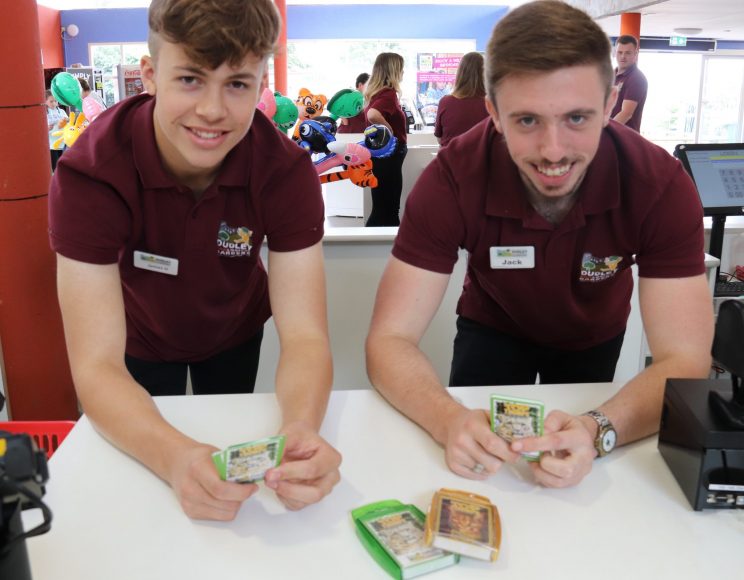 Our Safari Shop team have sold our own version, DZG Top Trumps, and the Awesome Animals pack across the UK and as far as Germany.

And one fan bought both sets of the classic card game as part of his bid to break a Guinness world record for the biggest collection of Top Trumps.

Even our new Customer Services Team Members James Dunn and Jack Tomlinson (pictured) have started swotting up on their animal knowledge through the game.

The DZG version of the popular game features animals from our bird, primate, big cat and ungulate sections while our stunning three-year-old snow leopard, Taïga, stars in the Awesome Animals pack along with creatures from eight other top UK attractions.

Our 40-year-old Bornean orang Benji gets in on the act too – his wonderful face features on a special edition bonus card which is free from our shop and can be played in the Awesome Animals set.

DZG Retail Manager, Isobel Blackwell, said: “We’ve sent out our Top Trumps sets all over the UK and even had one request from Germany. The cards are popular with young animal lovers and collectors alike, with one man buying them as part of his attempt to get into the Guinness World Records book.

“The games are great fun but also help people pick up fascinating facts about our wonderful animals here at Dudley.”

Both editions are available from our Safari Shop priced £5.99 each – or for a special price of £10 for any two packs, with free postage if needed. A free bonus card, which celebrates the zoo’s 80th anniversary, can also be picked up in the shop and played in the DZG game.

The two sets see players compare some of the world’s rarest animals according to their levels of cuteness, maximum weight and top speed.

Call us on 01384 215313 if you want to add the DZG and Awesome Animals packs to your Top Trumps collection and we’ll send them your way!