Three Brazilian rainbow boas have gone back on display in the Discovery Centre following a three-year absence.

Columbia, Drake and Raleigh  are now settling into their new vivarium. 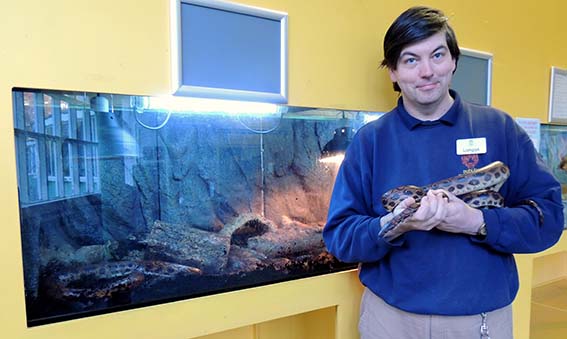 DZG Presenter, Langan Turner, pictured above, said: “We’ve recently moved around some of the vivariums in the Discovery Centre which has enabled space for their large tank to fit in right by the entrance.

“It’s great to have them back on show again as they are beautiful snakes and as they are used to being handled we are hoping to introduce them to participants of our rainforest and habitat school workshops.” 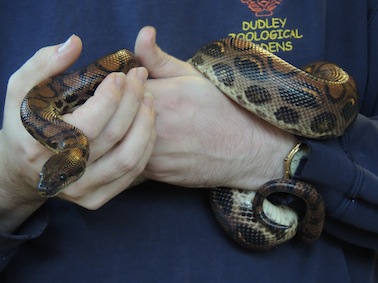 Staff have created an ideal tropical environment for the snakes and have decorated the tank with logs, rocks and moss as well as making the wall edge rockwork using polystyrene

Langan added: “Rainbow boas are strong snakes and Raleigh’s favourite game at the moment is to try and squeeze his way behind the polystyrene walls and hide from us; but we quickly sussed out his hiding places.”

Native to the tropical forests of central South America, Brazilian Rainbow boas are so called because of their distinctive iridescent shine.

They are usually red in colour with black markings, with the redness becoming brighter the older the snake gets.