The skins were donated by Mrs Lynette Collins of Sedgley, whose father-in-law, Ernie Collins, headed up DZG’s Cats’ Section during the 1960s. 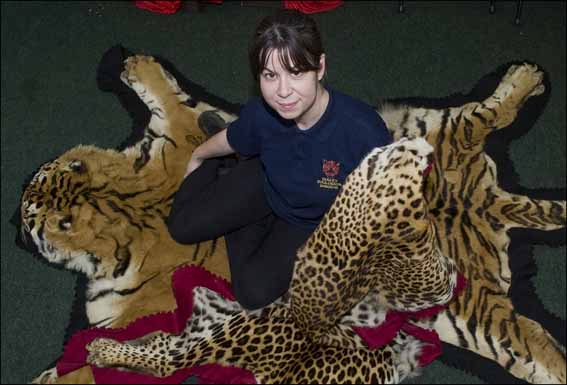 Presenter Becky Iwahashi with some of the donated big cat skins that are being used to spread the conservation message at DZG.

She discovered the forgotten items as she prepared to move home.   Lynette said: “It wasn’t until I was clearing out the loft that I?came across the box with them in, and remembered they belonged to my late husband, Tony’s, father who worked at DZG?in the 1960s. I wanted them to go back to DZG to be used for educational purposes.”   The gifts will be put to use in highlighting the scandal of the trade in animal products which could make some species of tiger extinct in the wild within the next decade. 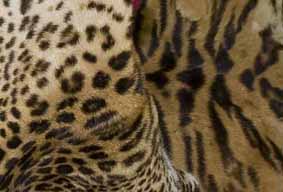 DZG’s Registrar and Research Co-ordinator, Dr David Beeston, said: “There are now more tiger skins hanging in stately homes, hotels and maybe people’s lofts around the world than there are tigers alive on the planet.

“In 2011 it was reported by the international conservation organisation IUCN that there were only 3,500 tigers remaining in the wild.”   The figure refects the total of all six remaining tiger sub-species ?Sumatran, Amur / Siberian, Bengal, Indochinese, South China and Malayan.    Three additional sub-species  Bali, Caspian and Javan tigers  are now extinct , having died out between 1940 and 1980.    Dr Beeston added:?”Conservation experts are desperately trying to save all sub-species but there are still people who continue to illegally hunt tigers for their body parts which are then sold for use in Asian medicine.   “There has also been a 45 per cent loss of valuable tiger habitats, due to forest clearance, often to make palm oil soap.”

“DZG’s conservation programme for tigers concentrates on the Sumatran, of which there are approximately 300-400 in the wild. The DZG?project has seen six cubs born over eight years which have helped boost collections across the globe.

“Leopard populations are also declining, but the situation is a little less serious.   “The big cat skins donated by Mrs Collins will be used as specimens for educational and conservation awareness purposes, to illustrate the need to control the trade in animal products.”

They may also be useful as a source of DNA for university scientists and zoologists carrying out research. The information contained in a single hair could help build up a more comprehensive data base of tigers from yesteryear.

CEO?Peter Suddock, said:?”In the 1960s it was common belief that animal skins would always be readily available so it wasn’t unusual for a member of staff to have such a skin within their possession.   “Many such skins were used as rugs and blankets. However, today it is a very different story as the species is so critically endangered.

Previous: Beans means Grotto!
Next: YOU can wake up the zoo!