We’re singing from the rooftops in thanks to YOU for helping us achieve a silver award for contributing more than €3,000 to save Asian songbirds from extinction. 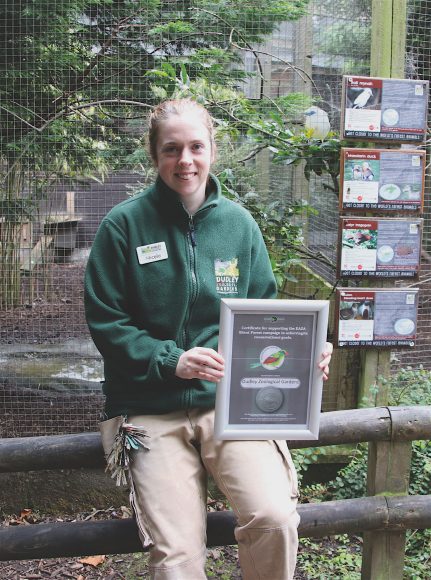 For the last two years we’ve been raising funds and awareness for the European Association of Zoos and Aquaria (EAZA) conservation campaign ‘Silent Forest, Asian Songbird Crisis’, which aims to tackle the crisis of birds being stolen from the Southeast Asian forests and used in singing contests or illegally traded as pets, pushing many species to the brink of extinction.

Through on-site fundraising days, donations and sales of plush birds in the Safari Shop we’ve been able to send off €3,101.80 towards the campaign, exceeding our original target!

Birds Section Leader Nicola Wright, who headed DZG’s effort, said: “We’re thrilled to have raised so much money towards EAZA’s efforts to help save these beautiful birds and thank our visitors for their generosity and it’s lovely to have our efforts recognised with this certificate.”

During the campaign we’ve also been incredibly lucky to be joined by a breeding pair of the world’s most iconic songbird species – the critically endangered Bali Mynah.

It is estimated that Bali Mynah numbers are so low in the wild, with currently fewer than 50 thought to be left, that European Endangered Species Programmes (EEP) such as the one we’re involved in are massively important in keeping gene pools of these species alive.