DZG’s seven Cameroon sheep have taken up residence in the shadows of the 11th century Dudley Castle. 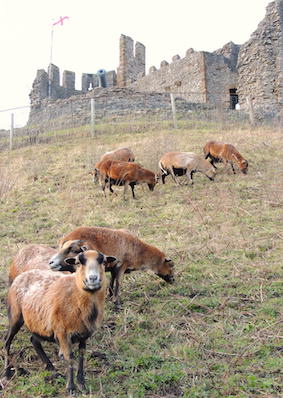 Keepers have moved the livestock to the castle bank for the coming months.

“It’s been a long while since we had any animals in that location, but they show really well there with the castle behind them.”

It took a team effort to relocate the animals from their former bank, alongside the Queen Mary Ballroom.

Lesley added: “We had to catch them up individually, but it gave us an ideal opportunity to wash their feet and worm them and give them a quick health check before releasing them into their new surroundings.”

The castle bank also includes a new shelter which has been built by Curator Richard Brown.

Previous: Sunshine for snowies
Next: Tickled pink for flamingos!