Some of the world’s most innovative animals were showcased at a Tipton school event as part of National Science and Engineering Week. 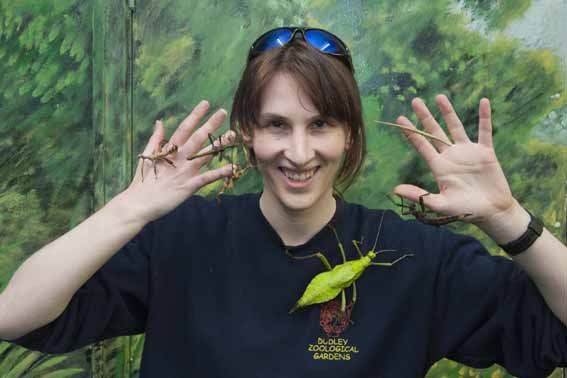 Caroline said: “We wanted to show how animals can inspire innovation and how some creatures are amazing at problem solving.

“We also took along some examples of how animals can be innovative; including a chinchilla which we explained has very thick fur which has been adapted to keep them warm and white’s tree frogs whose skin helps them retain water.”

The team also used a Cassowary bird skull to show its horn-like soft crest on its head, which is used like a crash helmet and spider skins to explain how the skin is used as protection and support for the bodies.

Caroline also led an outreach session at Bournville School as part of their science week.

Accompanied by a corn snake, a ferret and two hissing cockroaches, the presenter spoke to year seven and eight pupils about how to classify different animals.

Caroline said: “The workshop went well and hopefully we can inspire some children to become taxonomists when they grow up so they may be able to discover their own species.”

Previous: Spotlight on Madagascar
Next: Waterfall for snow leopards