DZG’s new little Barbary sheep has been named Sol  after he was born on the day of the summer solstice. 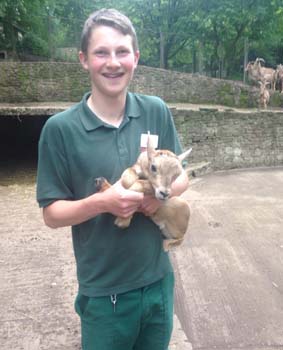 The little mountain sheep was born on June 21st  the longest day  and was given the new name by keepers who said he is making good progress.

“And given our recent heatwave it’s an appropriate name on both counts!”

The last baby Barbary sheep was called Max, named by keepers after Jay’s first child, as a surprise for their Section Leader when he returned from paternity leave.

Max the Barbary sheep was born on the same day as little Max Benjamin Haywood, on February 26th. 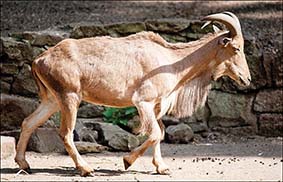 Barbary sheep are sometimes be mistaken for goats to which they bear a superficial resemblance but are distinguished from goats by longer tails and mane of long hair on their legs and throat.

They have microscopic suction cups on the bottom of their hoofs which help them climb straight up rock structures.

They are very agile and can achieve a standing jump of more than two metres. The young are able to negotiate the rocky terrain almost immediately after birth.