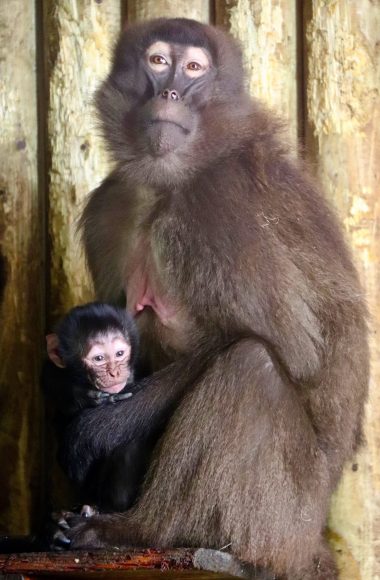 The youngster, who was born on March 6, has been named after a market town in southern Ethiopia – the native homeland of the species and was given the moniker by Keeper Stephanie Ballard who was the first to find the newborn.

Senior Keeper Jodie Dryden said: “We let Stephanie choose his name as it was her first ever zoo baby discovery, so he’s extra special!

“And Jinka’s perfect, as it’s also a town near Jimma, which is his mum’s name.

“She’s still keeping a close hold of Jinka at the moment, but the other youngsters are beginning to get more inquisitive around him, although it won’t be long until he’s also gamboling around the bank with them all.”

We now have six juveniles in the troop – five boys and one girl. Dad to all is Ebano.

Geladas are the last surviving species of grazing primate and are known as shuffle-feeders, as they prefer to continuously pluck grass blades while shuffling about on their bottoms.

Previous: Putting the planet first
Next: Another primate baby!